It was supposed to be just an experiment. An attempt to make something with no tradition in these parts of the world. A spirit for friends, oddballs, artists, and barflies. But it became something much bigger. The first Czech absinthe accepted by the strong international absinthe community. A product that started the second absinthe wave in Czechia and showed everyone that absinthe is not a liqueur that looks like mouthwash and tastes like chemicals. Our patron Saint Antoine.

In the spring of 2007, some customers wondered why we did not make absinthe. They knew us as skilled manufacturers of natural spirits and they wanted to know how we’d cope with the task and make this famous, prohibited spirit. And so I began to ruminate on it.

Before distilling, we had to devise a name. Each upcoming product of ours is given a prototype name for our records. And in this case, the code name was Paradox as we found it paradoxical that the first Czech distilled absinthe was to be made by our fruit distillery which had no experience with absinthe at all.

The first batch of 300 litres was distilled in October 2007. I found the recipe in a book called Traité de la Fabrication des Liqueurs et de la Distillation des Alcools, published in 1871. It was a combination of two styles – Montpellier and Fougerolles. I took coriander from the former and veronica from the latter. But the recipe isn’t everything; with absinthe, the most important part is the manufacturing protocol, i.e. the exact procedure. A tiny deviation can mean an entirely different output. And I didn’t know the procedure at the time.

The first batch, vintage 2007, hit the market in February 2008 under the name Absinthe St. Antoine.

I was satisfied but I needed feedback from experienced drinkers. But there were none in Czechia then. At the time, only cold-manufactured liquors with various flavouring and colouring agents were being manufactured and consumed here. Hardly anybody knew how the original version of this beverage should taste. And so I discovered La Fée Verte, the world’s oldest absinth forum.

Following registration, I offered free bottles in return for opinions. The forum members showed interest, and so we sent dozens of packages to France, Switzerland, USA, Sweden, United Kingdom and other countries. The feedback was immediate. They slammed it, giving us ratings around 50 points out of 100. Mediocre as can be. But they told me what was wrong and what I should do better. I replied that I appreciated their input and would make the next batch much better. I shocked them. A distiller who suppressed his ego and followed the advice of anonymous drinkers from an Internet forum.

The first response came from Steve:

Hats off to you, Martin, for listening to us and taking our criticisms without offense. I look forward to trying the next version.

Next was Donnie Darko:

We distilled the next batch in November 2008.

Tibro, who was among the first to receive the bottle, wrote:

This bottle is light years beyond the first. I really wasn’t wanting to call the first one an absinthe, though it held promise as an herbal liquor like absinthe.

A success! But still, there was something missing. So we made a third batch in July.

And the third was the breakthrough. A fantastic absinthe and currently the most sought after archival batch. For me, it was one of the best spirits I ever tasted, and this batch started our famous absinthe career.

Famous graphic designer Martin T. Pecina brushed up his original design and made a one-off anniversary label you will see exclusively on this year’s bottles that will come onto the market right after Easter. (If you want to see the very first graphic design, go to the year 2007 in our Chronicle.)

The product we had no knowledge about has become a pivotal part of our product range. And five other types have joined it over time. It was a good decision back then. And you are to “blame”. 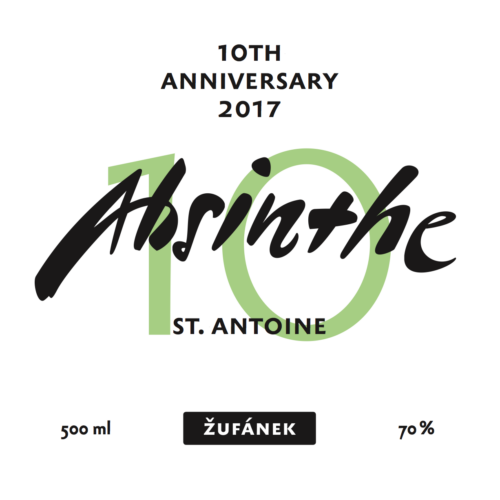